Kyokushin was founded by Masutatsu Oyama in 1964, but it had been developing since the early 1950s. As a child, he also trained in Kempo, and later extensively in Shotokan under Gichin Funakoshi, Goju Ryu under So Nei Chu, and Judo. 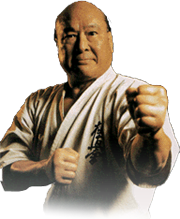 Kyokushin rapidly gained in popularity, to the extent that more than 12 million people worldwide practice it. It became known as "The Strongest Karate", not only because of the incredible feats of strength and endurance that Mas Oyama performed, such as the 300 man kumite, but also because of the rigorous requirements of training and tournaments.

It requires you to be strong in mind and body, and this characteristic of its practitioners is generally well recognised among the martial arts in general. Kyokushin is best known for its full contact fighting.

The Kanku is another significant image associated with Kyokushin, and symbolises holding two hands up together and looking into the sun

In 1994, Mas Oyama died, leaving behind a saddened organisation. The original one he formed broke up into a number of different ones using the same, or similar, name, which sometimes is a source of confusion to the uninitiated.

For more information, check out the other items under the About us tab in the menu above. The spirit of the karate however still remains much the same in most of the groups.

This is represented by the stylised Japanese kanji characters on the left hand side of this paragraph. These are embroidered over the heart on every Kyokushin karate uniform, and some practitioners even have it tattooed on their chest in the same place.

It is almost universally recognised by most established martial arts. The logo was developed for Mas Oyama by a renowned calligrapher.

This truth is a personal truth - it cannot be given to you. You must find it through training, sweat, pain, but above all, persistence.