Not everyone has the right stuff.

Have you got what it takes?

One of the distinguishing features of Kyokushin training anywhere is that with each grading you are required to demonstrate your command of everything up to and including the grade for you are being examined, and not just the material for the current grading. You are also expected to show improvement for all material learned for previous gradings.

The underlying philosophy is that when you reach the black belt levels, you are not only a karateka, but also a teacher and exemplar (as indeed you should be all the way through) for grades junior to you.

Thus, if you cannot demonstrate a command of all techniques and kata from previous gradings, then you probably shouldn't be going for the next grade.

IFK Australia belts are customised to show that you belong to an internationally recognised organisation. They have an IFK logo on them, as well as the Kanji embroidery that reads "Kokusai karate renmei" which means in Japanese "International Federation of Karate" which is the name or our parent organisation.

In IFK Kyokushin, there are 10 levels (not including white belt) known as kyu grades before you get your black belt. The belts representing these grades are shown above, starting from the left. Each colour has two levels. You start at 10th kyu (first red belt) and from there it's a "count down" to 1st kyu and then black belt. Up to 5th kyu, the senior yellow level, gradings are run by the individual dojo operators at 3-4 monthly intervals. 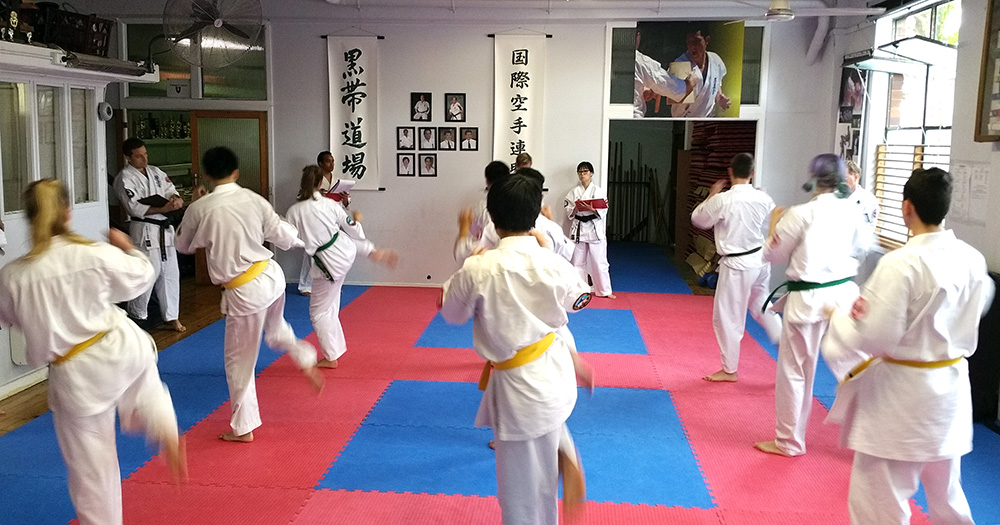 For all grades above 5th kyu, including black belt levels, a panel of examiners grades the candidates at 6 monthly intervals, currently in March and September.

Gradings get longer and harder as you climb the ranks, because for each grading, you are also retested for the previous grades. Some organisations, including other Kyokushin organisations, award black belts to younger students, but the minimum age for black belts in the IFK is 14 years. Below that, it is considered unlikely that a student has both the physical and mental maturity to be a black belt.

Achieving a Kyokushin black belt not only a physical test of stamina, but also a test of mental stamina, because it takes four or more years as an adult (and much longer if you start as a child) to get your black belt.

Unlike so many commercial styles of martial arts where everyone gets a black belt, even under the age of 10, it's often said that only one in a hundred Kyokushin beginners makes it all the way to black belt.